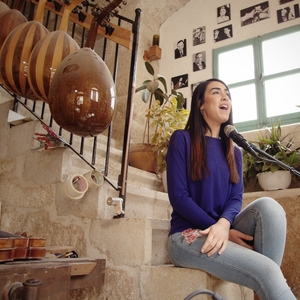 of the Palestinian region.

Of all the popular live-session music shows online today, NPR’s Tiny Desk has perhaps achieved the most successful format because it gives viewers the feeling they are witnessing an authentic musical moment, one often infused with a lot of humor, happiness, and a sense of intimate spontaneity. You get the feeling there are no effects, no makeup, no sound engineering behind the scenes. Although all those production tricks are there, you just don't feel them. Instead, you feel something profoundly in-the-moment. Now, imagine if you could take that feeling of connection, intimacy, and spontaneity of Tiny Desk sessions, and transport it to a conflict zone like the West Bank or Palestine's Gaza Strip.

That is the idea and spirit behind The Delia Sessions (premieres February 6, 2020), a new, recurring YouTube series of five-minute live music shows, produced in and featuring musicians from the world’s conflict zones, with a mission to share music and build connections between these regions and new global audiences. To be filmed in small, intimate venues in various cities across Palestine and presented in a simple and digestible format, the first emanation of The Delia Sessions features young talented Palestinian artists from Rola Milad Azar to Milad Fatouleh and Lina Sleibi, each performing primarily traditional Arabic songs in an informal, acoustic concert setting.

“The goal was to create a platform that will help these artists transcend the distance, both geographic and cultural, between themselves and the West, in a setting that feels very genuine and communal,” says Irish songsmith, producer, and philanthropist John Keating (aka Johno), who is also the founder of The Delia Arts Foundation, a non-profit organization whose mission is to provide the tools, infrastructure, and resources for young and burgeoning musicians living in conflict zones where opportunities for professional training and access to music technology are lacking.

After two years of working with musicians in Palestine and more than a decade working and performing with musicians across Africa and the Middle East in that role, Johno saw a need and began thinking about what might be an efficient and artistic way to take the authentic voices, art, and creation of these musicians and put them in a format that's easily digestible, easily accessible, and easy to empathize with for Western audiences.

“I wanted to know how we can take that magic we feel when we play with these artists on-site, not necessarily the exact musical sample, but that very intangible but connected feeling and that deep personal impression of being there in the present that's bestowed upon us while listening to or playing with these musicians.”

The first video in the series, set to be released on February 6, 2020, features a performance and interview with 27-year-old Rola Milad Azar, an independent vocalist and musician from Nazareth, who due in-part to such support, now sings in musical concerts and festivals throughout the world. Here, Rola performs the traditional folk songs “Ya Mayla Alghossoun” and “Almaya Almaya,” and discusses the tough conditions of being a musician and trying to make a living making music in Palestine.

Johno, himself an accomplished guitar and piano player, performs on the Delia Sessions and produces the reworked traditional Arabic tracks with modern arrangements to help a new generation of audiences re-discover the beauty of these classic songs. He notes there are some unique challenges that come with recording a lot of eastern and other more traditional musical forms from around the world. For example, the songs are often quite long and low-communicative to Western ears.

“We do a lot of taking traditional songs from sometimes twelve to fifteen minutes in duration and paring them down to two or three minutes,” says Johno. “We are also making the songs a bit more communicative musically, in terms of adding some harmonies and putting them in a form that's more familiar to Westerners, who are accustomed to hearing an intro, a verse, and a chorus.”

The Delia Sessions team brought on some talented video directors for each session with a mind to develop a unique feel and aesthetic for the series, carefully choosing culturally relevant shoot locations and cultivating a distinct visual style, from camera-angles down to the tones and colors used on set.  Says Johno, “We played around and experimented a lot with the aesthetic while shooting on location in the West Bank. Now that we have a format we firmly believe in, we want to scale it and teach local crews how to do this really economically.  Our idea is to get to a point where, for very little money, we can produce and upload videos from various regions to our channel and, very much like Tiny Desk, it will help unknown artists get exposure and help well-known artists in these areas get new exposure worldwide.”

While these first three sessions focus on classical Palestinian folk music, future sessions are slated to include everything from rappers and rock bands to electronic artists creating more modern manifestations of the Palestinian musical tradition.  In the near future, Johno hopes to take The Delia Sessions to other world conflict zones, including Syria, Sudan, Pakistan, and perhaps even Morocco and Tibet.

“We want to keep doing this and that depends a lot on public support,” says Johno. “This is something that cannot exist without public support. We hope to get enough exposure for this format and raise enough funding so that we can repeat this model anywhere else in the world that this kind of support is needed for artists. As a global music industry, we have a great responsibility to help their message get across.”

You can support the Delia Arts Foundation and The Delia Sessions endeavor by donating to their Patreon: patreon.com/deliaarts